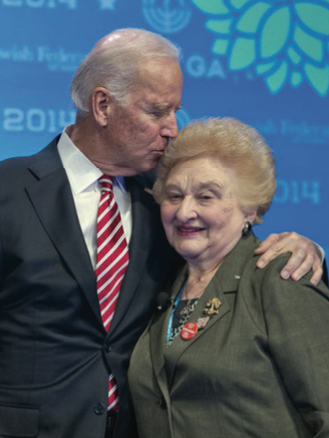 There was the Vice President of the United States, two Supreme Court justices and an Academy Award-winning actress, Marlee Matlin. There were Jewish professionals, lay leaders, clergy, recent college graduates and students from campuses across North America. The Israeli Prime Minister appeared via satellite from Jerusalem.

The November 2014 annual General Assembly of the Jewish Federations of North America drew 3,000 people to a conference center outside Washington, D.C. There, attendees could learn and dialogue about Federations’ philanthropic work, listen to presentations ranging from European anti-Semitism to crowdfunding, and schmooze.

“We can go beyond exchanging ideas to actually exchanging services,” Jewish Federations CEO Jerry Silverman said in a speech at the closing plenary.

The GA showcased dozens of Federation programs that are piloting new models for programming and outreach. Billed as “fedovations” (a mashup of the words “federation” and “innovation”) they included case studies in reaching younger donors, providing services to the elderly, planning profitable events, and finding ways to engage and excite unaffiliated community members. “It is always great to share with and learn from our colleagues in the field” said Diane Sloyer, Rockland Federation’s Executive Director.

Vice President Joe Biden affirmed the Obama administration’s “ironclad” commitment to Israel’s security and spoke of his experience taking his children to the site of the Dachau concentration camp, to teach them about the “incredible resilience and indomitable nature of the human spirit.”

Rabbi Lord Jonathan Sacks, Britain’s former chief rabbi, gave a rousing address about the importance of Jews’ commitment to each other despite their differences. “I don’t need you to agree with each other; I need you to care about one another,” Sacks said to a standing ovation.

A late-night session featuring The Atlantic editor Jeffrey Goldberg and the editors of two Israeli papers (Aluf Benn of Haaretz and Steve Linde of The Jerusalem Post) was packed. Goldberg revealed that his conversations with Netanyahu and other Israeli officials left him with the impression that Israel plans to wait until the next U.S. president takes office before rebuilding ties with the White House.

Nat Wasserstein, past president of the Rockland Federation, current member of the JFNA Board of Trustees and member of the JFNA Audit Committee, attended the GA along with Diane Sloyer and Rockland Federation’s current co-president, Andrea Weinberger. As a trustee, Nat (with Andrea) represented Rockland at the GA Board of Trustees meeting. According to Nat, “$244 Million in distributions to Israel and overseas was allocated in 2014, $34 million of which went to the ‘Stop The Sirens’ emergency campaign. For 2015, $214 million is recommended. Our partner agencies, JDC, JAFI and World ORT have made their cases and with a strong campaign, we can meet our communal obligations.”

The highlight for the Rockland delegation was an up-close and personal meeting with Natan Sharansky. The trio from Rockland had a meeting in a suite with a representative from the Jewish Agency For Israel. When they knocked on the door, Mr. Sharansky opened it. According to Diane, “it was an honor and privilege to have a few minutes with Mr. Sharansky before our meeting began.”

Next year’s General Assembly will be held in Washington DC from November 8-10. If you are interested in being part of the global Jewish conversation, please let us know!