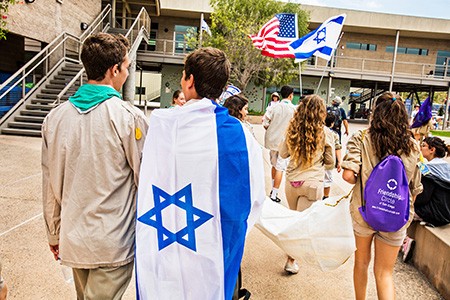 What does it mean to be the national homeland for Jewish people in the twenty-first century? This question was examined in a Jewish Federations of North America (JFNA) webcast seminar last month. And it’s not a new question – it’s something that every generation has and must continue to address. Rockland Federation, the Jewish Agency for Israel and the predecessors to JFNA all serve to represent the diaspora’s support and evolving perspectives in Israel.

During the webinar, professionals from Federations across the U.S. listened to speakers from The Reut Institute – an Israeli nonprofit “designed to be the most effective force of change in Israel” and The Jewish People Policy Institute (JPPI), a Jerusalem-based policy-planning think tank. Both of these organizations are creations of the Jewish Federation system. Naama Klar, Managing Director of The Reut Institute and Dr. John Ruskay, Senior Fellow of JPPI, were on the same side of the issue. Klar and Ruskay insisted that major steps need to be taken to renew Israel-diaspora relations so that Jews everywhere – primarily younger ones – feel an attachment to Israel as their homeland. This is an issue of great importance to the Rockland Federation.

The problem, according to Klar, is that what’s important to Jews outside of Israel is clashing with what’s important to those running the Jewish State. Klar also identified “the gap in the Israeli mindset” as a source of the problem. In the Israeli mindset, Israel is a source of unity and pride and an asset for the entire Jewish people. The reality, according to Klar, is that “Israel is becoming a partisan issue, and the perception of Israel as a peace-seeking, pluralistic society is eroding. The days of unconditional support for Israel are over.”

Klar’s organization believes it’s Israel’s responsibility to reinvent the relationship in order to renew ties and especially to forge bonds with the younger generation. Her organization’s goal is to change the Israeli mindset as well as to effect political transformation. But help from outside Israel is critical too. “Federation must continue to be the bridge between the diaspora and Israel,” said Klar.

Dr. Ruskay agreed that Federation needs to play a key role in bridging the gap, and identified a number of steps that individual Federations can take including “stepping up” Birthright enrollment, Israeli exchange programs, missions and other programs that can re-invigorate the relationship. He also stipulated that Federations need to focus more on Israel advocacy and education in our communities. “There needs to be a far greater awareness of our shared history and shared destiny, despite our differences” said Ruskay.

The Jewish Federation & Foundation of Rockland County is continuously working to strengthen the bond between Israel and our Rockland Jewish community. Please attend our Israel @70 Celebration on April 15 or join the October 2018 Journey to Israel to explore all that makes Israel a truly special place and to strengthen your own bonds with Israel.

Federation’s Israel programs are made possible by donors like you!